Dear ASIFA friends,As I am thinking about the end of the year and looking forward to next year, I want to let you know some of the great events and activities that your membership contribution provides for the central U.S. chapter and ASIFA international. We are a volunteer-run, 501c3 non-profit that supports the midwest of the United States with the goal to help promote progress towards peace and mutual understanding between all people as part of the Association Internationale du Film d’Animation. This coming year marks the 60th anniversary of our international UNESCO chartered organization!This past year members had the opportunity to animate in an internationally shown ANI-JAM.

Filmmakers could submit their films for showing around the world, We had the opportunity to make films together, explore techniques, and deliver papers at our annual retreat at Webster University in St. Louis. 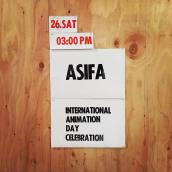 Our members organized and showed animation as part of SiteLab event in Grand Rapids, MI called Project One.

Looking forward to next year, our Central chapter is in the planning stages for doing a series of workshops, along with member meet and greet animation showings. Plans are already underway for our 2020 retreat —which will be announced soon. There are many international plans in the works for the 60th anniversary of ASIFA, including the creation of a short film to represent our Central chapter in a special celebration for International Animation Day. It will be shown with other short films around the world!  Finally, we are kicking off the new year with a fun Christmas Card animation party on January 3rd in Grand Rapids, MI.

My goal as president is to find ways to collaborate and spread the opportunities around our region. I would love to hear your ideas on how we can make ASIFA Central connect with you and your area of the great midwest. Please note that your membership or end of year donation is potentially a tax-deductable contribution to our 501c3 depending on your local state laws.